Well, here it is. The first original series from Netflix, that one-time DVD-by-mail service. Unlike their other series, Lilyhammer – which was aquirred after it’s initial run in Norway and the relaunch of Arrested Development – House of Cards is the first series produced directly and solely for Netflix and it’s subscribers. When I think back to the days when I was a subscriber to their DVD-by-mail service, I never imagined they would become a rival to HBO and Showtime. With House of Cards, that is exactly what they are – only better. For my $7.99 a month I now have instant access to a top-notch drama (as well as thousands of other titles) at my leisure and those without Netflix will now be envious of those who have it.

I dumped my cable subscription about 4 years ago. I found I was paying for more rough than diamonds. Now my money, my time and my entertainment is more streamlined and I have since become more productive. If I have to explain to you how that works, I ask that you put down the remote control and step away from the 698 channels on your television all vying for your attention.

We’ve gone from a “water-cooler” world to a “spoiler-alert” world. Meaning, we used to look forward to gathering around the water cooler at work to talk about what we all watched last night on TV because we all watched the same thing. That is simply not possible anymore (expect for sports or other 100% live events). Bring up the latest episode of what you watched last night and you are immediately hit with “SShhhhh, don’t tell me. I haven’t watched it yet.” or “Hello? Spoiler alert! Sheesh.” Ok, back to work then.

In the event you have access to Netflix and quite honestly, if you haven’t then what are you waiting for, get yourself ready for your television’s event of the night or day, or whenever you want. Settle in for a marathon or dole it out in doses like I have been doing. I am going to try and do 2 episodes every sunday night. Only because I know it will end soon and then I won’t be able to relish looking forward to watching another episode. The fact that I know it’s there just waiting for me, is so much more gratifying than waiting for AMC to air the next episode of Breaking Bad. It’s a matter of principle. A matter of controling my own destiny. If I happen to want to leave this computer right now and go watch the next episode of House of Cards, I can. It’s my decision. I know that at some point the season will “end” and I’ll have to wait for Netflix to produce more, but until then… no one else it watching it. I don’t have to worry about not having cable and people asking me if I’ve watched Sons of Anarchy last night. “No, I don’t have cable. I’ll wait till it streams. But I did watch the Lakers last night. Man do they suck this season.”

As for the program this review is supposed to be reviewing… it’s one of the best I’ve seen and I’ve only watched the first 6 episodes so far. It’s so enjoyable, I do not want to devour it in one or two nights, But rather, slowly absorb this terrific Shakespearean like tale.

The actors in House of Cards remind me of the cast of All the President’s Men. Everyone is busy doing something even when they are doing nothing. Kevin Spacey chews up every scene and gives much respect to the material. He’s clearly not doing this just for the paycheck. He has too much invested in this role. This is the type of roll and overall show that the Emmys are going to have to create a new category for or just include in the existing ones. Netflix is doing for shows on the internet what HBO did for cable. House of Cards is the new Sopranos. 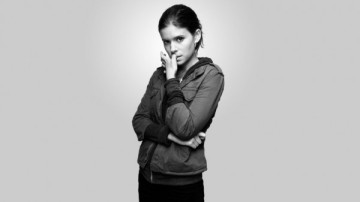 Kate Mara was a little too much of the ambitious go getter reporter at first, but once we caught a glimpse of her long-game strategy – she quickly becomes the barometer for where the action will take us. Plus she’s got a smoking-hot way about her even if she’s not really that smoking-hot. I’m guessing David Fincher has a thing for the Mara sisters. He cast Kate’s sister, Rooney, in the US remake of The Girl With The Dragon Tattoo. I wonder, is he a Giants fan or a Steelers fan? Hmmm.

Robin Wright plays Kevin Spacey’s philanthropist wife running a non-profit organization. They are the power couple. And boy, do they prove each other’s love and commitment for each other and each other’s cause in ways that would normally destroy a marriage. While the relationship may seem a poor tired cliché from the get-go, you quickly learn that it is anything but that. She is a steel-eyed shark who, after just 6 episodes in, is a wild-card.

The whole premise of the show is to highlight how much the the average citizen, the “little people” if you will, are up against a machine that we have no control over. From the politicians in congress, to the reporters in the news media, to the unions that muscle for benefits at the public trough. The entire system is stacked against us. But I imagine, as the story progresses, we will see the entire system collapse in on itself like a giant house of cards.

Please, if you don’t already have Netfilx, get it. If you don’t have a Roku, PS3, XBOX or any other device to stream Netflix to your TV, go get one. Don’t watch it on your computer or iPad. And for frak’s sake, quit spending $100 a month on cable and cut the cord already. You will thank me.

I’ve got 7 episodes left, won’t you join me?

I will usually rail on a film. Why? Because most films I end up seeing turn out to be garbage. Because the concept of the story was intriguing enough to get me in the seat, I usually get more upset and frustrated when I can clearly see where the film went wrong. I won’t be posting all the time because I actually work, have a girlfriend and don’t need to spend all frackin’ day writing reviews for free. Consider this blog a service to you. You can thank me at a book signing.
View all posts by Matt Edwards »
« Worst to Best NFL Helmets
Chicks With Chops – Top 3 Female Driven Comedy Web-Series »