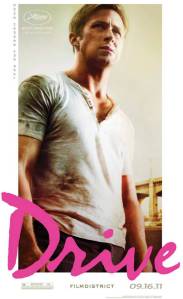 After this film ended I immediately began to point out all the flaws in the storyline, to question the motives of characters, to wonder why certain scenes were set where they were and to be mystified about how the hell do you waste the great Bryan Cranston. Funny enough, with all of that… I absolutely loved watching Drive.

Director Nicolas Winding Refn first popped up on my radar in 2008 at the Sundance Film Festival with his film Bronson starring the great Tom Hardy. Refn was able to help transform Hardy into such memorable character filled with uncontrollable rage and emotion. With Drive he was able to do the opposite with Ryan Gosling. Here Refn and Gosling create a subdued stealth like shark. Gosling is that shark, a subtlety pointed out in a sweet scene between him and the kid, Benicio, while watching cartoons. This shark is in constant motion, moving forward and never once stopping to wipe the blood from his clothing.

As I mentioned at the top, huge flaws for me in the story. Why do certain crimes happen in broad daylight when the chances of a problem are extremely high, especially when you set up the film with a brilliant night time heist & getaway as the standard of how this Driver operates. It’s unclear what motivates Gosling because there is absolutely zero backstory on him. We never even get to know his name. At one point he even steals a brand new car, again in broad daylight with a slim jim never once having to deal with a car alarm going off. Having an alarm sound off would have been a good moment of levity and even a comment on society. I mean, honestly when a car alarm goes off nowadays nobody pays attention and if they do it’s out of annoyance at the horrible noise. I can just imagine Gosling shrugging his shoulders at a passerby as they shake their head at the moron who can’t turn off his car alarm.

Bryan Cranston is one the most brilliant actors on TV right now and seeing him billed in this flick got me jonesin’ like Jesse in Breaking Bad after 10 days without a hit. While Cranston makes the most of his screen time, I would have preferred to see him cast as the baddy that Albert Brooks & Ron Perlman play. Not to take anything away from Brooks or Perlman. They were, are and always will be golden in any roll they take.

Now because we don’t know anything historical about Gosling’s character, I didn’t give a shit about the light love story that began to develop in the first half of the film. Carrie Mulligan, Benicio’s mother Irene, sat in the passenger seat of a film that didn’t need one. By no fault of Mulligan, she certainly wouldn’t have been missed. Irene would have been better utilized had her story not been so docile. I mean she’s made out to be the innocent angel. She was knocked up at 17 and decided to marry the father, a criminal wrapped up with all the wrong people who gets released from prison halfway into the film. Mulligan is a fine actress and she certainly played the innocent angel role with ease. I just would like to have seen a bit more depth to her.

So why then, with all these flaws, was this movie something I can’t wait to see again and again? Well the music was great, the cinematography was mesmerizing, the action was a simple bloody tableau of choreographed violence and there was some awesome driving. I was expecting a car chase to happen that would rival Ronin, Death Proof or even Bullitt. Sadly that didn’t happen, but we did get a tasty one with the stolen black mustang (nod to Bullitt?) that was good enough.

The simple yet intrusive imagery Refn put in front of the lens reminded me of what John Carpenter did with the first Halloween. In a film world filled with handheld shaky cameras, CGI and gratuitous images of sweaty torsos and hot bodies, Drive lets it’s story and action unfold clearly and succinctly with disturbing detail. Setting the film and shooting it Los Angles is another huge bonus. While helicopter shots looking directly down on the downtown high rises were one too many times, the rest of the city gets the proper loving camera treatment. (Although I do challenge any filmmaker out there to make a film in LA without having to wet down the streets at night. It rains maybe 40 days out of the year. I know it’s look great on film but being a LA native, it’s something that sticks like a Karl Malone on the Lakers.) So thank you Nicolas Winding Refn. You achieved in making a movie where I absolutely don’t care about how things are able to happen, I just enjoyed that they were happening.

I will usually rail on a film. Why? Because most films I end up seeing turn out to be garbage. Because the concept of the story was intriguing enough to get me in the seat, I usually get more upset and frustrated when I can clearly see where the film went wrong. I won’t be posting all the time because I actually work, have a girlfriend and don’t need to spend all frackin’ day writing reviews for free. Consider this blog a service to you. You can thank me at a book signing.
View all posts by Matt Edwards »
« “Billy Jack” HoneyHoney (2011) – Smooth as Whiskey
Jack and Jill (2011) – Rather Eat Rad-Nar »