Romantic Comedies always suck. Sure there are some fun moments and the plot sounds interesting, sometimes. Normally, they are rife with the same one-dimenstional cynical lead characters. A supporting cast of best friends and family members. Best friends whose lives seem revolve around fixing the problems of the leads. Forgettable family members who are either jerks, comic relief or both. Why again am I seeing this one?

Now of course she’s smokin-hot Mila Kunis (I swear that’ll be the only pic), but really she’s a better actress. A major factor in that assessment (the one about being a better actor than just smokin-hot Mila Kunis. Ok, that was it, I swear), is being in a film that was written right on-point and directed by Will Gluck. It’s apparent a lot of trust was given Mr. Gluck.

In the vain of one of my favorites, Kiss Kiss, Bang Bang which pokes fun at how movies are written, made and watched, Friends With Benefits pokes fun at it’s own genre – the Romantic Comedy. Early on we get a taste when Dylan (Justin Timberlake, I’ll get to him later) and Jamie (Kunis) are sitting together watching a typical romantic comedy starring Jason Segel and Rashida Jones in a made-for-this-movie-movie. Jamie likes the movie because she’s a girl and all girls love romantic comedies. Dylan is enjoying pointing out all the typical cliched things that always happen in romantic comedies because he’s a guy and all guys love to point out all the bad shit in the movies their girldfriend/wife drags them to. Thank you Will Gluck! Now I can sit back and relax knowing that the filmmakers are completely aware they are being asked to make a cliched romantic comedy. That doesn’t mean they won’t use the same tactics, it just means they will use better ingredients. 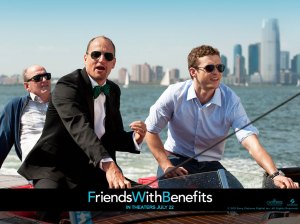 Those ingredients include Woody Harrelson, Patricia Clarkson, Richard Jenkins and Jenna Elfman. They bring alive such rich characters. Do they fulfill the needs set out in typical romantic comedies? Yes, but they actually have lives of their own too! I actually was drawn into each of these supporting characters lives. Learning about them makes the audience understand better the history and possible future of Dylan and Jamie. Thus making us care a whole lot more about the stars of the film. What a novel idea!

When they decide to “play tennis”, their euphemism for this new arrangement, Jamie busts out a bible for them swear by it. The bible is on her iPad, which makes for a relatable fun moment when they try and deal with the iPad’s motion-direction sensor. It’s little things like this peppered throughout that make this film relatable to our current culture. The attention to detail the filmmakers and actors gave is very apparent in this film and I greatly appreciate it. I never felt talked down to, cheated on, pandered to or spoon fed. Also, there was a lot of sex happening in the movie. Some may say it was too much. 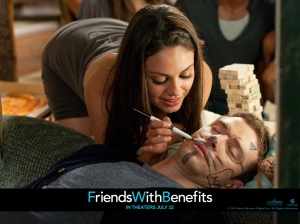 It’s a movie about friends having sex with each other, a lot. What did you expect in a film titled Friends With Benefits, friends sharing heathcare and 401k’s? And with this being a romantic comedy, that which attracts the females more than the dudes, you better be having the sexy times. Which brings me to Timberlake.

Justin Timberlake. He was good. He did his job. He works-out… a lot. That makes the females happy when he takes off his shirt and walks around butt naked. He’s no Matthew McConaughey (that’s for the ladies.) but Timberlake is never afraid of coming across as the fool and how can you be with a rocking bod to back you up. I’m certain he is a confident person. I’m just not sold on him yet. He feels a touch miscast in this, as well as Bad Teacher. I just don’t buy it. He’s better in films like Alpha Dog, Black Snake Moan and Social Network where he can show off some testosterone. In Friends With Benefits, his femininity is in the driver’s seat. Again I say, he is no Matthew McConaughey.

The real winner in the film isn’t really the story, it’s the presentation. It’s almost a blessing that the 8-car pile up No Strings Attached came out earlier this year, it’s hard not to compare the two and see what went right and what went wrong. The filmmakers here did a great job, the supporting cast nailed it, and the studio execs approved or demanded the casting of the extremely talented and smokin-hot Mila Kunis (rule of three, people. Rule of three). Except for a few plot points in the set-up, nothing felt forced. Good job everyone, your romantic comedy movie didn’t suck!

I will usually rail on a film. Why? Because most films I end up seeing turn out to be garbage. Because the concept of the story was intriguing enough to get me in the seat, I usually get more upset and frustrated when I can clearly see where the film went wrong. I won’t be posting all the time because I actually work, have a girlfriend and don’t need to spend all frackin’ day writing reviews for free. Consider this blog a service to you. You can thank me at a book signing.
View all posts by Matt Edwards »
« Horrible Bosses (2011) – An Unrealistic Mess
The Devil’s Double (2011) – Sadistically True Tragedy »